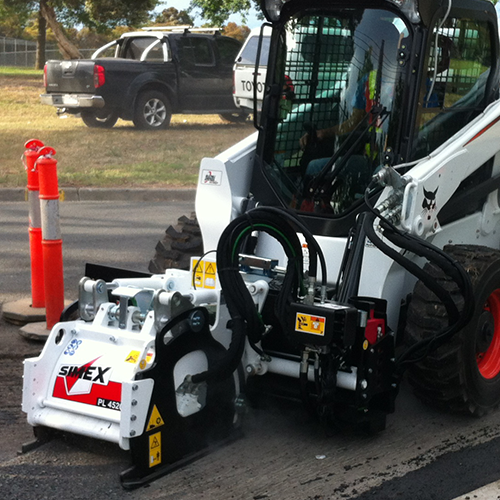 In 2010, Leon Smith, owner of Specialised Bob Cat Services purchased a SIMEX PL4520 Planer to be fitted to his new Bob Cat A300 Skid steer but instead of having a standard controller box for the planer Mr Smith requested the SIMEX Planer to be controlled and operated with the original skid steer joysticks. “I know this requires reconfiguring the wiring but I want all the controls on the joystick’s” he said.

In general, skid steers come with six functions but SIMEX Planers have eight. In standard setting this means the operator or someone outside of the skid steer cabin is required to flip a switch on the attachment unit when switching from tilt function to side shift function is needed. “Having joysticks to control the PL4520, I do not have to operate a separate controller box and I do not have step out of my skid steer” explained Mr Smith.

Walkers Hammers’ Service Manager, Tino Vinella started to investigate options for integrating wiring of the SIMEX unit with the original wiring of Leon’s skid steer but it seemed nobody had done this in Australia before. After several late night video conferences with the SIMEX manufacturer in Italy and working closely with the sales representative at Clarke Equipment, supplier of the Bob Cat A300, the new wiring concept started to take shape. SIMEX manufacturer put Tino in contact with a technician in California USA who had done similar wiring for a Bob Cat two years prior and he was able to confirm that this innovation works.

Three additional switches were fitted to the skid steer joystick to control ‘on and off’ function, water tank operation and safety switch for drum activation & the Float function. All the other functions such as depth control, tilt control and side shift control were incorporated through the integrated wiring in the original buttons on the joysticks. As a result, all functions of the SIMEX Planer could now be controlled and operated with the joysticks inside of the cabin and best of all, it all looked like part of the skid steer.

Mr Smith has successfully operated his SIMEX Planer with the skid steer joysticks for five years and when it was time to upgrade his Bob Cat to a bigger model of A770 and the old planer to a new model with a built-in water tank he wanted the same setting in his new equipment. Clarke Equipment that supplied the Bob Cat simply removed the integrated wiring from A300 and re-implanted it the new A770 and added three new on/off switches on the side A pillar.

The old Planner PL4520 has been traded-in and it has gone through a refurbishment including fitting a new rear frame with built in water tank.

“Yet integrated wiring is not limited to these brands as other OEMs work along the same lines” says Tino. “We will obtain the wiring diagram, test the points in the socket and rest of the electrical work is completed by Walker Hammers or by the OEM’s electrician”.

A close cooperation with OEMs and their electricians ensure the normal warranty conditions remain valid and full wiring, relaying and switching gear are covered by OEM’s warranty programs. Walkers Hammers always leave the original wiring loom in the machine to ensure another type of OEM attachment can be plugged straight in the original socket.

“This extra service brings clear benefits to our customers”. “Operator can operate and control all functions with the joysticks switching between the tilt and side shift functions can be done from the cabin without a need to step outside to pull the lever” explains Tino.

“We have not advertised this service but word of mouth is proving strong and nowadays, enquiries from any Victorian Asphalt contractors always include a request for integrated wiring” added Tino.