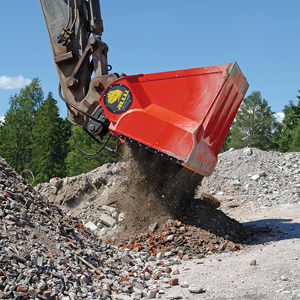 ALLU provided an effective solution to a construction site in Adelaide CBD where removal of a large soil deposit full of rocks, building materials, roots and other debris had been requested.

Rather than disposing the waste soil to landfill that would have been a significant cost, ALLU Transformer screened and processed the soil and reduced the amount of unusable waste to a third of its original volume. And best of it all, ALLU loaded the waste material directly to a disposal truck during screening and processing that made the job progress fast without extra steps.

Construction site was able to re-use the processed soil and with a reduced need to transport waste, contractor saved in transportation costs, halved the landfill payments and did good for the environment by recycling the leftover material.

Similarly, by turning green waste into mulch and screening it directly to a transport truck in a onestep-process ALLU DN2-12 attached to a Doosan DX225LC excavator increased productivity by 100% and halved the fuel consumption in screening process for WA business in tree removal and pruning industry.

Because ALLU’s capability to do several functions in one stage and ability to screen wet product, the time to produce desired end-product from suburban green waste can be halved compared with the traditional ‘vibrating screening’ method. Vibrating screening is a time-consuming twostage process with high fuel consumption particularly, when using the smaller screen.

With ALLU transformer, customers avoid double handling because ALLU transforms the base machine into a mobile processing plant, transform waste into re-useable and saleable material for example for road construction or landscaping and reduce landfill costs as well as need for transportation.

Versatile ALLU Transformer will process just about anything so, customers do not have to invest in several machines because ALLU does it all. And with one ALLU you can produce multiple fragment sizes, with various blade and drum configurations. Some ALLU capabilities are but not limited to: