Above and beyond the call of duty 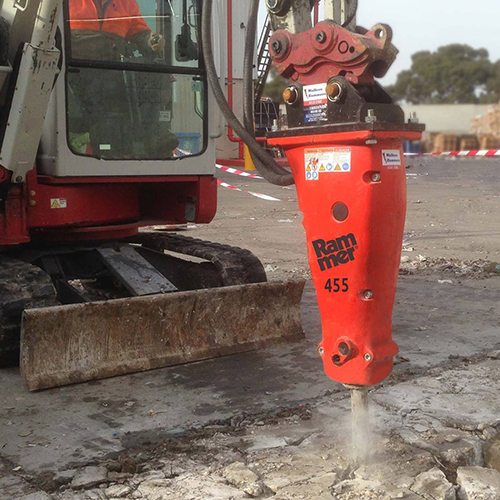 An Australian construction company has put its faith in a small Rammer hammer following a highly successful trial against a competitive brand. The outstanding performance of the small Rammer 455 hammer, combined with the commitment to service and support from the local dealer, Walkers Hammers, were both instrumental in the company’s purchasing decision.

With a staff of 10, plus a long-serving team of contractors, Dante Constructions provides a range of building and maintenance services for the Victorian food, paper pulp and manufacturing industries. To provide  enhanced levels of service the company recently purchased a 3.5 ton Takeuchi TB128FR excavator, and subsequently went looking for a breaker to work with it.

According to company director Frank Mazzitelli who took over full ownership and management of the family company in 2009, Dante Constructions has made changes in the equipment it operates and what it sub-contracts to suit the needs of the projects it undertakes.

“We gave up operating excavators over 10 years ago when I decided to subcontract this work to contractors who I use on a regular basis,” he explains.

“However, we recently secured a job where an excavator was needed long-term, so having promised never to own a hydrau-lic machine again, I decided to purchase a Takeuchi TB128FR. To increase its flexibility, we then decided to purchase a small hammer for a specific project; as I do with most things, I asked around and identified what  I thought were the two market leaders, Rammer and another well-known brand. For me, it came down to a trial between these two makes.”

Upon being contacted by Frank Victorian Rammer dealer Walkers Hammers was happy  to loan Dante Constructions a Rammer 455 for a few days to see how he liked it. However, things didn’t go so well with this other brand. “There was a bit of a delay with the other dealers’ availability to provide a breaker, then a further delay because I needed to wait until I returned from leave,” Mazzitelli said.

“When the other dealer finally arrived with the hammer, we put it up against the Rammer 455 which was far superior in every way. It then turned out that the other hammer was a previous model, because the dealer was out of stock of the current comparable model – but did not inform me of this before the trial. As the other dealer left the site, knowing he had lost a sale, I called Walkers and asked them to send me the invoice for the Rammer 455.”

Comfortable trialing
Overall, Mazzitelli was very impressed with the total Walkers Hammers package – not just the hammer itself, but also service and support.

“From the word go, Walkers couldn’t do enough for us,” he said. “They were the first to supply the Rammer on site and mount it to my machine. They were happy to leave it with me for a lengthy period of time, which made me feel comfortable trialling the hammer without any pressure and in my own job site. It hasn’t missed a beat. It’s a small hammer, on a small machine, and currently we are using it primarily to break up factory concrete floor slabs and plinths. It’s operating in pretty tight spots, breaking relatively high strength concrete, and I would say it performs magnificently.”

Frank Mazzitelli is equally impressed by the attitude of his local Rammer dealer.   “Every step of the way, Walkers has been understanding; they assured me the hammer would speak for itself, and it certainly did.   I’ve only got really positive things to say about Mike and Tino from Walkers.” Mazzitelli concludes: “Their credentials certainly shone through when I spoke to others in the industry; everyone I spoke to had positive things to say about them.”